Are you making “frupid” mistakes with your HCM?

In tight economic times, it can be tempting to trim costs and expenses in any way possible. But making decisions that look good initially can backfire and cost your company much more in the long run – the proverbial “penny wise and pound foolish” philosophy. A more amusing term for this is “frupid”: frugal, but stupid. Can you see yourself in any of these mistakes?

Hiring is an expensive, time-consuming process. It can be tempting, particularly if a position is vital and vacant or if you are generally understaffed, to hire basically anyone who seems like they will perform adequately and hope for the best thereafter. This approach, unsurprisingly, frequently results in additional costs for training (to help bring a substandard employee up to speed), coworkers who become frustrated and annoyed with new employees who aren’t great fits or aren’t reliably performing their job functions, and high employee turnover (perpetuating the cycle by re-igniting the need to hire again).

Example: Three weeks before the busiest manufacturing season begins, the CEO’s administrative assistant quits suddenly for personal reasons. Rather than take the time to write up a great job description, place a quality job advertisement, and interview promising candidates, the hiring director hires a friend’s son “just for now” to get them through. The new employee isn’t a good fit, and quits midway through the busiest season; the company has to fill the void with a patchwork of temporary employees and overtime for existing workers. This result costs more…definitely a frupid choice.

Waiting too long to hire.

Especially in industries that are seasonal, or cyclical, it can be tempting to wait until business picks up or a project begins to generate revenue before hiring additional staff. This strategy can save money in the short term, but can incur additional costs to get enough staff up and running to handle the “boom” times which may cancel out or exceed those savings.

Example: A tourism company, which has been growing for the past two years of its existence, is slow during the winter season. Rather than hire tour guides in February, when they’re not yet needed and business remains slow, the company waits until April, when business picks up. As a result, the training schedule has to be cobbled together and the trainees train one at a time, rather than all together – costing time and money from existing employees. Also, permits for new employees have to be rushed, at additional cost, and everyone in the company feels frustrated and overwhelmed. Ultimately, the expenses match or exceed the savings, and the intangible stressors cost an indeterminate amount to the organization…a frupid choice.

Firing all the managers.

“Middle management” seems to be first on everyone’s list when layoffs are necessary, but that may not be the smartest long-term strategy. Great managers are also an integral part of an efficient, effective organization. Eliminating those positions may result in decreased productivity across the board – or worse. Unhappy employees can lead to more inefficient working situations, voluntary flight from the company, and potential lawsuits.

Example: A large software company, attempting to cut payroll costs, eliminated many of the first-line managers of the production engineers. Their intent seemed reasonable: more-experienced engineers could also be supervising less-experienced engineers, and could report directly to what had been the second-line managers. Unfortunately, the more-experienced engineers made lousy managers. They took too much time to perform their new additional managerial functions, hated doing so, and became less productive at their own jobs. In turn, the lower-level engineers suffered from lack of direction and management. Many quit, and one sued the company for wrongful discharge, claiming to have been constructively discharged because of a hostile work environment. Firing the first line managers was instinctive – but frupid.

Especially in organizations that cut a certain percentage “across the board,” there’s a danger that losing staff in certain departments will cost more than the savings in salary will bring.

Example: A large hospital network, subject to citywide budget cuts, was required to lay off 10% of personnel in all departments. Unfortunately, the reductions in staff in the accounts receivable departments meant that the hospital’s collections suffered. The lack of personnel meant that insurance reimbursements were filed late and subsequently denied. The hospital lost more than 10x the revenue that it saved by “trimming” those employees – undeniably frupid.

If you’re worried about optimizing your human capital management (HCM), hiring processes, or other employee management issues, an integrated payroll and software system may be able to help. Talk to us about performing an analysis of time and cost on a minute-by-minute basis of your business expenses and other benefits of a customized workflow system. Take a look at www.stargarden.com or contact us today! 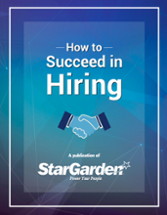